This is definitely not-your-typical-breakfast, but it is what I had today... 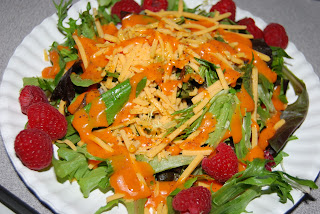 Important to note:
Only 9 WW Points+
I used real, full calorie, full fat dressing because it is worth it.
Just got in 4 servings of vegetables.
I got 1 serving of fruit.
Also, a serving of dairy
AND I just got in both of my "healthy oil" servings for the day!﻿

A fantastic start to my day. Now I can go on my Niki-date-night and feel good about my choices.
Posted by Christina No comments:
Email ThisBlogThis!Share to TwitterShare to FacebookShare to Pinterest
Labels: food, health, points, vegetables, weight watchers

I walked for 24 minutes yesterday and 30 today.

I just cannot get it out of my head...


Move it or lose it.
It = Mobility

Or it could be positive and read...


Move it AND lose it.
It = Weight
Yay me!
Posted by Christina No comments:
Email ThisBlogThis!Share to TwitterShare to FacebookShare to Pinterest
Labels: aware, exercise, mobility, move, weight, weight watchers, workout

I'm counting points. I am trying to move.

Well, that title could be the short-version of this post...

Here is a medium version...

I am NOT going to go into the repeat mental battle that I have fought the past two months because I have preached it on this blog before. In fact, I will not even link the old post. I have to just move on from this indecisive mess.

I rejoined Weight Watchers and after friggin floundering around with it for a month, and actually following the plan for a month, I am down 10 pounds. (*clap, clap, clap!*)

WW has changed their program (again) twice in the recent months. Points values for foods changed and you must exercise. Basically, higher carb and sugary foods end up "costing" you more points and you must meet a minimum amount of points earned doing activities of your choice (minimums are based on your age/height/weight/lifestyle, etc... just like your food points allowances). Sooo, that's cool. It is definitely not LC/NS like I sometimes feel I *should* do, but you do tend to eat less of the sugary/carby stuff since it eats away at your points. (a pun, yay!)

Like I said, I will not dwell on that stuff. I am just doing it.

What I really wanted to talk about was the fact that I have had two things happen this week that have made me actually want to M-O-V-E.

I have seen a woman (with some aggravating knee problems - like me - and probably partially due to weight - also like me) end up tearing ligaments in her knee. She is now on crutches and miserable. I will not go into much detail there either, but ouch.

The other thing - I saw on Yahoo! where a girl, Natalie Strawn has lost 252 pounds on Weight Watchers (she started at 500+, so don't hate...) and when they interviewed her on television, she mentioned that at first she was unable to exercise. Literally, unable... she was so obese and sedentary that she was PHYSICALLY unable to get up and move around.

Here's the kicker...
With my current weight and the direction I tend to head with eating and being OUT OF CONTROL with my weight... I could VERY easily have my ability to MOVE yanked away from me. So easily.

Scott and I were talking just last night about that girl's weight loss and how I thought that it was awesome. Of course he (obviously-still-a-14-year-old-perv) says, "I wonder what it would be like to have sex with a 500 pound woman." My quick witted reply? (which is *so* not like me by-the-way) "Well, if I cannot keep myself in gear, I guess you will know pretty soon..."

Go ahead... you are either appalled, or laughing. I do not want to know.

Then we talked about why it seems that even following WW now is *soooo* much harder for me than it was six years ago. Well...let us go back and read that sentence. SIX years ago. I was SIX years younger. That plays more into it than I care to even begin to think about. I am 31 years old now. I have more working against me now than I did then, I'm sure.

That being said, Scott said that he felt like movement was going to be key for me now. Well, how nice and coincidental that WW now requires movement?! The good Lord sure does have good timing and a sense of humor.

So, there. Yep, I am still here. I have not completely abandoned my blog... I am just trying to focus on being phat, not fat. A hott mess, not just a mess. Bahahaha, yep, I went there.